We Americans are a mostly delusional breed of human who sincerely believe that “freedom” means obeying edicts written down by total strangers, paying said strangers to finance bombing hospitals and children, and then complaining to these very same people for the terrible job we reward them for doing!

Allow me, perhaps, to suggest a few alternatives:

Are you spending your time harassing people to vote for your Favorite Great Leader?

Asking people to “Write/Call Your Senator To Fix Some Problem!”? Then you are part of the problem!

“You don’t understand, this Great Leader is different!”

You’re starting to sound like someone with battered person syndrome.

Remember, by taking this system seriously you are giving power to “the 0.00008%!”

That robs you of your right to complain—by definition! After all, how can they hear you? Even if they could, how could they possibly appease 300 million conflicting demands?

There is (in theory) a blue wedge there representing a majority in Congress, but it’s invisible. Congress would need to be a city of about 2 million people for even 1 blue pixel to appear!

Even if your Favorite Leader were elected, do you really think such a system makes sense? Should such a tiny fraction of any population dictate the behavior of the whole, especially on minute and personal details such as whom you are allowed to marry or what you are allowed to do with your body? You’ve never met these people and you don’t know most of their names! Why are you waiting (and paying!) for their permission on these matters? And why are you badgering them to tell other people what to do?

Those who call this a “democracy” of any sort are beyond hope, but you, dear reader, you should know better than to take such a system seriously.

To put this in perspective, consider a stadium full of 1000 people trying to make a decision about something important. What would a Congress (0.000167%) of this stadium be? 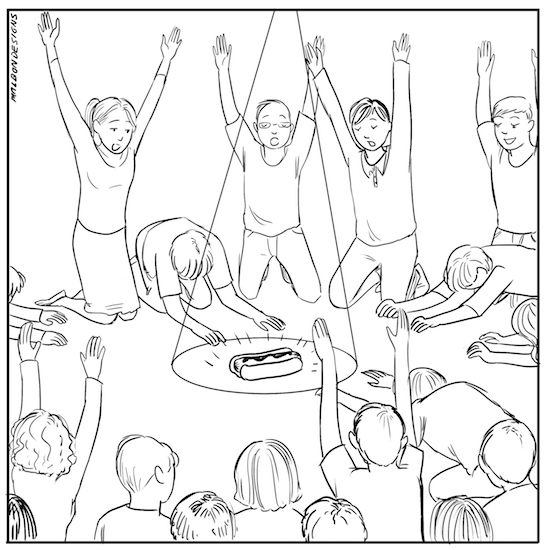 We would be watching a stadium full of hotdog worshipers waiting patiently for the hotdog to finish deliberating (while beseeching and petitioning it!), and then finally obeying the edicts of its half-a-hotdog “majority”.

“But the hotdog has really good ideas, you should listen to it!”

Hey, I totally get it, you want to replace the rotten hotdog that told you to finance the bombing of hospitals and children with a better hotdog and hope for the best1—and there’s nothing wrong with that except why are you using a hotdog to decide consensus on the problems facing the other 1000 people?

I have nothing against smooth-talking hotdogs,2 but I shouldn’t have to point out that it doesn’t make sense for the 1000 people to defer their decision-making to this one hotdog!

Rule Of Thumb: If you’ve never talked to a person, don’t delegate your power to them!

It saddens me so much to see people give their time and energy to dishonest people whom they know only as pixels on a screen—pixels on a screen that don’t even acknowledge their existence! This can’t even be called representative democracy, as representation in such a situation is literally impossible:

It is mathematically impossible for your senator to represent you: https://t.co/vz8wvWrwqU

“But what about slavery? And gay marriage?”

Do not misunderstand me, I am not saying that we should ditch the federal government! I do not believe it is all bad. It does have its place: serving the needs of its constituents, states (as collective entities, not the individual entities within them).

The federal government can act as a stage for states in conflict, where states can select a mutually agreed upon third party to mediate their dispute. For example, a state can file a complaint on behalf of the inhabitants of another state who requested outside assistance. A hearing will then be held where:

Alternative #4 expands upon this.

Many of America’s problems stem from a federal government that is overloaded and incapable of wisely handling the responsibilities that we have burdened it with through hotdog worship.

We need to take some of the weight off of the federal government’s shoulders (decentralize it) and move it to its proper place: states and cities.

In this comment I describe a concept called a decentralization coefficient. I was reacting to a statement made by Dorian Nakamoto:3

“The concept of few governing many is wrong!”

This brings to mind the concept of hierarchies. Hierarchies sometimes get a bad wrap, but as any large organization knows, they end up naturally forming anyway and in the end are indispensable for organizing human behavior.

So how do we keep them from going bad? By:

The decentralization coefficient refers to: the difference between a “few governing many” situation, and:

In other words, you must pay attention to: how many people are in a group, what their responsibilities are, and how others feel about their performance.

Q: Who are among the happiest and healthiest cancer-free people (that did not need a hotdog healthcare system to get that way)?

A: The people of Okinawa Island.

Watch the documentary Happy and you’ll notice something all of the groups they interviewed had in common: they all consisted of tightly-nit, self-reliant communities whose residents relied on each other for all kinds of support. That is in stark contrast with much of the United States, where people consider it practically a virtue to spend time deciding who to send to the hotdog, petitioning the hotdog, but somehow not a virtue to spend time ensuring that everyone in their community has food and a roof over their head no matter how many 1’s and 0’s are in their bank account!

Is it any wonder we are all doped up on anti-depressants? What are we doing? What happened to Think Globally, Act Locally? We need to get our s**t together and spend more time focusing on our local communities (myself included!) and less time and energy campaigning, talking, or even thinking about hotdogs!

Don’t empower the hotdog! Even looking at it is harmful! Save that time and energy, and use it to empower your local city and state communities!

Uncle Sam wants to know: What will you do for your local community?

Scaling while preserving decentralization is easy to do if you understand the following:

To use the United States as an analogy, we see these “levels” of scale:

We have delegated too much power / too many responsibilities to the federal government. They are mathematically not up for the challenge.

Scaling local decisions to a level where they don’t belong does not work. The federal government should be responsible for solving problems appropriate for its level of scale. That could be things like mediating disputes between states, allowing the states to vote on united action, enforcing universally agreed upon rights (i.e. Bill of Rights), etc. The federal government should not otherwise interfere with the internal affairs of states (except to provide a setting for the settling of inter-state disputes; see end of Alternative #1 for details).

Similarly, we should not directly pay taxes to the federal government! At the very least we should be paying more to governments that we can actually see on a population pie chart, and much less to those we can’t.

Doing otherwise is to cross a scaling boundary, and that generates conflicts through misaligned responsibilities and incentives. The United States federal government should not (and cannot)5 be heavily involved in the affairs of the country’s citizens. Its duties are to its constituents: states.

It’s easy for people to change cities if their city is doing a poor job of providing services, but difficult to leave a country. That is why the default should be to pay cities/states—not a giant central government that can provide poor service with little consequence. Paying our taxes locally creates better cities. Better cities, in turn, results in a better country for all—from the bottom-up.

Ideally, therefore, we should be paying most of our taxes to our city and/or state for the services that they—not the federal government—provide. Cities, in turn, can pay taxes to their state for any services they need, and only then should a state pool its money with other states for collective defense and inter-state projects.

New systems like blockchains and liquid democracy (example) are being developed to both better scale representation and decision-making at all levels, but even these systems must heed their carrying capacity and take care to avoid crossing scaling boundaries.

We must stop worshiping the hotdog.

That means an end to:

They cannot hear us. When they hear us, they cannot fix our problems. Instead, let’s let the hotdog focus on hotdog problems while we focus our attention on our local communities. Let’s build better systems and optimize our decentralization coefficients.

EDIT (June 6, 2016): See this thread. At some point I need to write up a followup post to this one. I do not believe that “Ending Hotdog Worship” is mutually exclusive with taking (fairly minor) action to avoid risking the potentially severe negative consequences of completely ignoring a large existing broken system.

EDIT (November 18, 2016): Actually, a friend persuaded me to vote third party. It was just an extra checkbox on the form, in addition to the local issues. Everyone seemed unhappy with both primary candidates, and people appeared to be voting almost purely out of fear, not out of preference. Helping the Green Party get closer to 5% (which would give them over $10 million in federal benefits), and boosting competition (choice), seemed like a no-brainer. If anyone gives you flack for voting Third Party, just point this out to them.

Thanks to Andrea Devers and Bob Jesse for suggestions/edits. Hat tip to Steve Dekorte for pushing idea of city-states.